Assemblies of Remembrance of God

Home/Programs/Assemblies of Remembrance of God

Assemblies of Remembrance of God 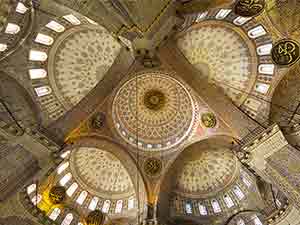 In all its assemblies, programs and activities, NAFIS incorporates the various practices of remembrance of God [dhikr] feeling His presence and seeking His support, help, and guidance.

Narrated by Abu Hurayra, may God be pleased with him, that the Prophet, may God bless him and grant him peace, said “God has mobile squads of angels, who have no other work to attend to but to follow the assemblies of dhikr and when they find such assemblies in which there is dhikr, they sit in them and some of them surround the others with their wings till the space between them and the sky of the world is fully covered, and when they disperse after the assembly of dhikr is adjourned they go upward to the Heaven, and God, the Exalted and Glorious, asks them although He is best informed about them: Where have you come from? They say: We come from Your servants upon the earth who had been glorifying You reciting subhānallah, uttering Your Greatness saying allāhu akbar, and uttering Your Oneness reciting lāilāha illallah, and praising You uttering alhamdulillah, and begging You. He would say: What do they beg Me for? They would say: They beg You Your Paradise. He would say: Have they seen My Paradise? They said: No, our Lord. He would say: What it would be then if they were to see My Paradise? They said: They seek Your protection. He would say: Against what do they seek My protection? They would say: Our Lord, from Hell-Fire. He would say: Have they seen My Fire? They would say: No. He would say: What it would be if they were to see My Fire? They would say: They beg You for forgiveness. He would say: I grant pardon to them, and confer upon them what they ask for and grant them protection against what they seek protection from. They would again say: Our Lord, there is one among them such and such sinful servant who happened to pass by and sat there along with them. He would say: I also grant him pardon, for they are a people the seat-fellows of whom are in no way unfortunate” (Sahih Muslim).

Narrated by Abu Hurayra, may God be pleased with him, that the Prophet, may God bless him and grant him peace, said “The Prophet‎, may God bless him and grant him peace‎, ‎said: God, ‎the Exalted and Glorious, stated: I am near to the thought of My servant as he thinks about Me, and I am ‎with him as he remembers Me. And if he remembers Me in his heart, I also remember him in My Heart, ‎and if he remembers Me in assembly I remember him in assembly, better than his remembrance, and if ‎he draws near Me by the span of a palm, I draw near him by a cubit, and if he draws near Me by a cubit I ‎draw near him by the space covered by two arms. And if he walks towards Me, I rush towards him‎ (Sahih Muslim).

Narrated by Abu’d-Darda, may God be pleased with him, that the Prophet, may God bless him and grant him peace, said “Shall I not tell you the best of your deeds, and those that give you the highest rank, and those that are the purest with your King, and are better for you than giving gold and silver, and better for you than meeting your enemy and striking their necks?” They said, “Of course.” He said, “Remembrance (dhikr) of God the Almighty” (At-Tirmidhi).